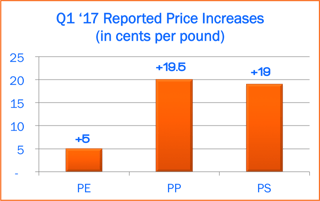 The first quarter of 2017 wrapped up with three consecutive months of significant price increases for several polymers. Tight supply and increasing feedstock costs along with other factors resulted in a perfect storm that provided suppliers with the leverage to increase pricing. However, this month it seems that there may be a light at the end of the price increase tunnel for buyers of both resin and sheet.

To help give some context to the current pricing surge that many customers are seeing, and when you may expect some relief, below is a recap of market pricing reported for the month of March:

Polypropylene pricing increased another $0.03/lb this month following a $0.065/lb increase in February and a $0.10/lb in January, bringing the total price increase to $0.195/lb for Q1. Last month it was predicted that polypropylene inventories would improve as maintenance outages came to an end and supply increased. However, this is yet to be seen. So instead of flat prices as originally estimated in last month’s report, pricing moved up for the third month in a row. However, this is hopefully the ceiling and there are signs that a supply response is around the corner. Polypropylene inventories have begun to recover and signs point to polypropylene spot prices decreasing. Moving forward, this down-trend is expected to be passed through to the resin market and some price relief is predicted in the upcoming months.

Polystyrene pricing increased another $0.06/lb this month, following an $0.08/lb increase in February and a $0.05/lb in January, bringing the total price increase up to $0.19/lb for Q1. CDI originally estimated that there would be no additional price increase this month. However, polystyrene contract prices had actually increased by $0.06/lb at the time CDI was published and their pricing was revised accordingly. Because of high feedstock costs and supply limitations, the January and February increases were not too surprising. However, despite producer nominations of $0.06-0.012/lb, CDI expected lower costs and thus did not anticipate an additional increase for March. With supply and demand beginning to even out, styrene monomer, benzene and ethylene costs have all begun to stabilize. Similarly to PP, this is expected to be the peak of the price increases as lower costs and better supply help to reduce and eventually stabilize prices.

Polyethylene index prices came in flat for March after a $0.05/lb increase was passed on to the resin market in February. Producers, on the other hand, had a $0.06/lb increase on the table for March at the time CDI was published. In the CDI polyethylene write-ups last month, there was uncertainty as to where the market would end up for March and a potential $0.03/lb estimate was predicted. Delays in new capacity startup, planned maintenance, and tightening of polyethylene supply all contributed to the increase for February and there was uncertainty as to whether this would continue. Now a month later the market is throwing off mixed signals. Despite producer’s nomination of a $0.06/lb increase, there are several market fundamentals at play, such as a decrease in demand, lower global oil and feedstock prices and additional polyethylene capacity startup, that do not typically support an increase.  As a result, CDI has revised their March pricing outlook to remain unchanged this month. Moving forward, stable prices for April and May are predicted with the possibility for some decreases towards the end of Q2 / early Q3.

The volatility of the resin market can be difficult to anticipate and customers should note that Impact Plastics makes no guarantee that price fluctuations will follow projected patterns outlined. For more information please contact your Impact Plastics sales representative: